Last weekend we went to Germany for a visit. For those of you who don’t know, my Gran lives in Frankfurt and she’s 96 years old. She lives on her own in a modest flat, and though she may be four years from a century she’s just as sharp as ever.

I was born in Germany but I’ve always felt Canadian rather than German. Our family moved to Canada when I was three, and although German was my first language I soon forgot it in favour of English. As a result my brother and I had to endure six years of German school on Saturday mornings, for which I have yet to forgive my parents. But I put that minor grudge aside whenever we visit my Gran; it’s good to be able to communicate with her, however stilted my Germany may be.

Recently I’ve developed more of an affinity for the Fatherland. That could be due to me recently acquiring a new German passport, after 16 years without one. However, I think the feeling was more solidified when we recently bought a rotisserie chicken and ate it at a nearby park, attempting to carve the bird with plastic utensils in the blowing wind. I’ve never felt more German. 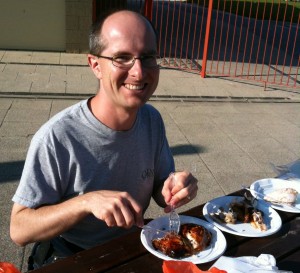 And so we flew from Heathrow to Frankfurt on Friday morning and had a nice few days with my Gran. Our girls had never been there before, so it was nice for them to see where my Gran lives (she’s been in the same place for 46 years), and Connie and Heidi also enjoyed a trip to the big swimming pool nearby.

I must admit that I surprised myself at my proficiency in speaking German. Seems those years at German School were not a waste after all.

Whenever I go back to Germany I am confronted with my family’s history, which is really an amazing story. My Dad’s side of the family escaped from East Prussia (now Poland) on a boat during the war – there were two boats that carried civilians and one was sunk but the other made it. My Mom’s side of the family escaped the same region a few years after the war when communism had taken over and getting out was not a simple task. On both sides of the family they had to leave quickly with nothing but what they could carry. It kind of puts into perspective our own move, where we brought a living room full of boxes (mostly toys).

Germany is a scarred nation from all that they have been through over the past 100 years. And yet today they are thriving, relatively speaking, while many other nations are struggling. My gran has also been through a lot, and her memories of those unfathomable days are still strong. But she has also emerged, and I think she’s happy in her own way.

It was a good visit. I’m glad we went.

This entry was posted in Update and tagged family, Germany, holiday. Bookmark the permalink.