With our train fiasco behind us, we arrived at Chicago, Amtrak’s hub city with good reason. 9 major train routes depart from this city covering pretty much the entire country, including Seattle, San Francisco, Los Angeles, New Orleans, New York, Boston, and all points in between. 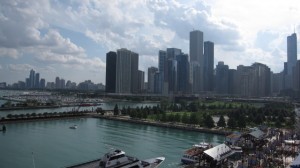 We’ve now been travelling for over two weeks, and we’ve needed a bit of a break, from the daily activities. Chicago has proved a nice place to slow down and have some quieter days; something that we’ve needed although it means we weren’t able to see as much of this great city as we might have liked.

We’re staying at a nice non-hotel apartment building that mainly does long-term rentals but also fills up their space with short-term stays. So we have a one-bedroom suite with a full kitchen, the girls sleeping on a sofabed. The location is great – just north of the main part of the city which would appear to be the main shopping district. When I was walking back to our apartment last night and passed by the Rolls Royce dealership, I thought that this is probably a fairly nice part of town. 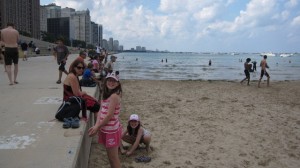 Chicago is on Lake Michigan, so it reminds us a bit of Vancouver, in the sense that there are beaches and marinas right next to the city. We walked up from our apartment to one such beach, and then on to Navy Pier, a newer entertainment complex built in the style of old boardwalk-style piers. 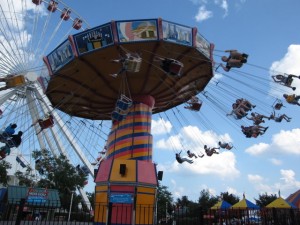 We went on a few of the rides at the pier and then had dinner at Connie’s Pizza, a Chicago institution apparently. Connie was particularly happy about this.

The weather on our trip has been fantastic for the mostpart – very hot and almost always sunny. Here in Chicago our luck turned and although it has been nice at times, we’ve finally had some rain. Unfortunately this came at a particularly bad time for us…

We had already purchased tickets to see the Chicago Cubs (baseball) play on Monday night. The Cubs play at Wrigley Field, which has been their home since 1916, and it’s a great old-style ballpark with lots of character. Unfortunately, it has no roof, and sure enough it was raining heavily at 7pm when the game was due to start. 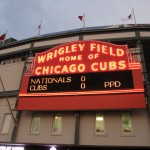 Match postponed due to rain

After about 40 minutes they officially postponed the game, to be replayed on Thursday afternoon (by which time we’ll be overlooking the Grand Canyon). So, sadly, we missed our chance to see some baseball in Chicago.

We’ve enjoyed Chicago and we’d like to come back at some point when we have a bit more time and energy to explore the city. It feels a bit like the little brother trying to be New York – big and energetic but not quite all the glitz of its big brother.

Today we leave at 3pm to catch the train to Los Angeles, with a stop at Flagstaff, Arizona for the Grand Canyon. This will be our longest train jouney (about 30 hours), and yes – I checked our tickets to ensure we are leaving on the right day. I’m hoping to do short updates during our trip through the Western Frontier.

We went on a trip around the USA as we headed back from England to Canada. Using this account we tracked our progress and published entries throughout our trip. Enjoy!
View all posts by Mike →
This entry was posted in Mike, USA 2011 and tagged chicago. Bookmark the permalink.