Vienna for a Day 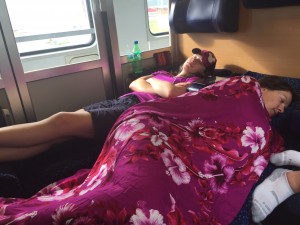 We had our own compartment on our train from Salzburg to Vienna, with seats that could convert to a little bed!

When we were planning our trip, we wanted to travel from Salzburg to Venice on a night train. However, that train leaves Salzburg at 12:30am, far too late for those of us that need their beauty sleep. So we opted to take the two-hour trip to Vienna and enjoy a day in the world’s most livable city, before catching the night train from its origin at a much more civilized time of 9:30pm. 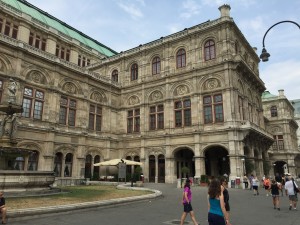 Side view of the grand state opera house in Vienna

We walked through the main part of the city while listening to another Rick Steve’s audio tour. His honest yet noticeable appeals to purchase his guidebooks is becoming a running family joke during our trip. We took a moment out of the walk to tour the state opera house — a very large and fancy facility but sadly 75% of it was destroyed during WWII so most of the building features architecture from the 1950’s. 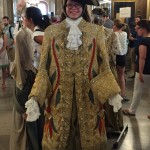 We also visited the “Haus Der Musik”, which was a bit hit & miss. Heidi, Connie, and Rachel all did well at being a virtual conductor of the Vienna Symphony orchestra; Heidi had a few goes and was eventually doing her own impression of Mr. Bean, conducting with one hand while looking back at towards the audience.

Soon we were back at the train station, where we ended up having to wait an extra 40 minutes for our train to depart (our best laid plans did not quite come to fruition). Eventually we were off to Venice… 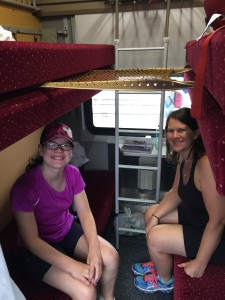 Our sleeping compartment from Vienna to Venice