English Christmas (and some other stuff)

Hmm. My lack of recent blogging has meant that there are lots of little things piling up. I’ll now try and make up for it with some rambling.

Let’s talk about the weather

They say that the national English pastime is talking about the weather. I can confirm this is true. We’ve had quite a cold snap here lately; highs of -5ÂºC during the day. Most of the country has had a fair bit of snow, but Bristol has so far been (exclusively?) left out – Connie and Heidi are most disappointed.

I’m personally getting tired of telling people how it doesn’t get this cold in Vancouver. The stereotype of “Canada is Cold” is deeply rooted, and combined with the aforementioned compulsion to talk about the weather, I have to explain to everyone that Vancouver actually has quite a temperate climate.

Some things are the same

I am able to watch Hockey Night in Canada here, which is rebroadcast on ESPN America every Saturday night (well, Sunday morning). It has surprised me how much of an emotional impact this has had on me – not so much the hockey itself but the experience of enjoying something very familiar in a foreign place. When you’re away from home, these visual and auditory cues of something familiar bring home closer.

The only other thing that has kind of compared to this is… Costco. Yes, they have Costco here, and it is exactly the same as Costco at home. The oppressive fluorescent lighting, the familiar nondescript price tags with products on industrial shelving, and of course, the cookie-cutter store layout – it’s like stepping through a wormhole back to Port Coquitlam.

Happy and sad at the same time

On Monday I drove up to Telford, a two-hour drive north to watch an afternoon session of the UK Championships snooker tournament. I saw two legends of the game, Stephen Hendry and Jimmy White, and I had a great time. The fact that I did this and enjoyed it makes me out to be somewhat sad, in the pathetic sense of the word. No matter – I submit that I am the only person in the world who has a keen appreciation of both ice hockey and snooker. There, my epitaph is now written.

I like Christmas in England. It’s not that different than Christmas in Canada I think, but there are some quirky English Christmas traditions – not so much the ancient traditions of a millennial society, but the kind of traditions that seem to have been born in the 60’s and are now so cheesy and old-fashioned that they have become endearing.

1. Strange Christmas food: Christmas pudding (stodgy fruitcake) and mince pies are, I’m afraid to say, not a few of my favourite things. These are almost made up for by a plethora of Christmas-themed chocolate. There is also a noticeable lack of candy canes here.

2. Christmas pop music: It is perhaps the pinnacle of success as a musician if you can be at the top of the charts during the week of Christmas – ie. the Christmas Number 1. Since the popular music charts are dominantly influenced by teenage girls, and since teenage girls don’t much like traditional Christmas carols or Salvation Army brass bands, the Christmas Number 1 is almost always a pop song dressed up with festive words and some jingle bells. This strange mix has yielded a back-catalog of former Christmas Number 1’s that are trotted out every year to create England’s musical Christmas backdrop. It’s less “White Christmas” by the classic Bing Crosby and more “I Wish It Could Be Christmas Everyday” by 70’s glam-rock band Wizzard.

3. Christmas dinner: When I was growing up, “Sunday Lunch” usually meant McDonald’s after church. In England, “Sunday Lunch” is a tradition that is as protected as ancient listed buildings. It’s a roast dinner (beef, pork, or chicken) with roast potatoes, yorkshire puddings, and lots of vegetables. I highly recommend it. And then we have Christmas dinner, which from what I can make out is just Sunday Lunch with a bigger chicken (read: Turkey). The major difference is that everyone is obligated to open a Christmas cracker, place the thin paper crown on your head, read out your incredibly bad joke, and play with your MADE IN CHINA ‘gift’. Of course you can buy Christmas crackers in Canada, but here they are mandatory.

4. Santa Claus: A lot of the Santa stuff here is the same as what I’m familiar with, although people insist that Santa lives in Lapland, which is somewhere in northern Finland. I find this personally offensive, since everyone knows that Santa is Canadian, living as he does at the North Pole. But when you go to the mall and you want to get a picture of your child with Santa Claus, you will find him in “Santa’s Grotto”, which I always think sounds a bit, well, creepy.

5. Christmas TV: Perhaps it was during Victorian times that England developed the entrenched Christmas tradition of showing James Bond films on TV; I don’t know. Regardless, Christmas would not be Christmas without poring over the festive edition of the Radio Times (TV guide) and noting the broadcast of a one-off Christmas special of your favourite TV show. I’m not talking about kids cartoons like A Charlie Brown Christmas or The Grinch; it’s actually more like Christmas editions of Top Gear (a car show) or the soaps. 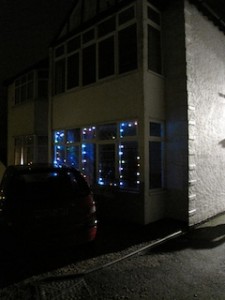 Our little bit of Christmas cheer

Other festive points of note

Well that’s enough for now – thanks for reading all the way to the bottom.

This entry was posted in England vs Canada, Mike, Update and tagged christmas. Bookmark the permalink.

3 Responses to English Christmas (and some other stuff)