So we’ve been here in Miami for a few days now – tomorrow we take our first train ride just upstate to Orlando.

Miami has been great. It’s pretty much as advertised – hot, sunny weather; miles of sandy beaches with warm ocean; a heavy latin-cuban influence. What’s been particularly nice for us on this trip so far is that we had very little planned for our few days here – just relax and enjoy our surroundings. 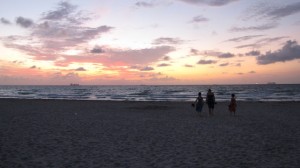 Our first morning on the beach

With the jet-lag we’ve been getting up quite early – Connie was up at 3:15 this morning. Each morning we’ve gone to the beach as the sun is rising — this photo was taken on our first morning with the fantastic sunrise at 6am.

Our hotel (Tropics Hotel on Collins Ave in South Beach) was nice if a little worn. It’s a cross between a hotel and a hostel – large rooms each with ensuite but also an open kitchen area beside the pool. And speaking of the pool, it was probably the warmest swimming pool we’ve ever been in — glorious! The ocean, too, was lovely and warm but not too rough – nearly perfect I would say.

On Tuesday we rented bikes and cycled alongside the ocean path. Rachel went for a run this morning down to the bottom of the South Beach peninsula. 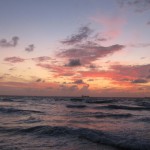 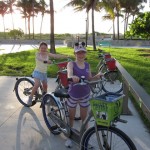 After three nights at the Tropics Hotel, tonight we’ve moved to a different hotel closer to Miami itself, ready for us to catch an early-morning train to Orlando. Our hotel here is a newer Hampton hotel; we’re particularly anticipating the free hot breakfast tomorrow morning. 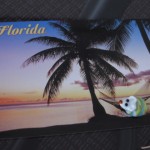 We’ve attempted to start one little tradition by taking along a little ceramic mouse that we bought at a craft fair in Bristol. His name is Marble and we’ll be taking pictures of him in various locales on our trip. Here’s Marble on a postcard of Miami Beach, enjoying the sun 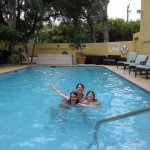 Our hotel pool in Miami

Tomorrow we’re off to Orlando where we’ll be for just a couple of days before moving on to New York. It will be our first time on the train so we’ll get a taste what’s to come. One minor inconvenience is that I have yet to sort out a SIM for my phone which means that I’m not able to get online and post as much as I would like. Hopefully this will get sorted out in the next few days.

We went on a trip around the USA as we headed back from England to Canada. Using this account we tracked our progress and published entries throughout our trip. Enjoy!
View all posts by Mike →
This entry was posted in Mike, USA 2011 and tagged Beach, Miami. Bookmark the permalink.