Ahh Niagara Falls – tourist mecca and place of thundering water, as the native people called it. As one might have guessed, all this water did, at one point, make me so desperate I had to pee in some nearby bushes.

Niagara is an interesting place, as the falls are shared between the US and Canadian sides. We decided to stay on the US side, in keeping with our US-centric holiday. Fortunately our proximity to Canada is close enough that there is a Tim Horton’s nearby (I missed you, Boston Cream). 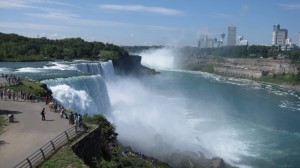 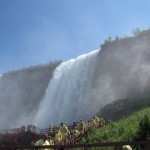 Cave of the Winds

The weather was fantastic – bright and sunny – and the misty water was lovely and warm.

We also enjoyed a buffet lunch at the nearby Casino (top tip: arrive for a late lunch at 3pm and pay 40% less than the dinner price!), and we walked around some of the nearby islands in the State park. We’re staying at a nice little guesthouse here, a sort of hostel/B&B. 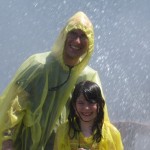 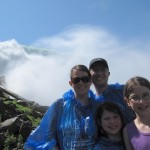 Later yesterday evening we made our offical return to Canada after over a year of absense. We had to go through the process of declaring our goods that will be following us into Canada, something that I had taken quite a bit of time preparing for before we left England. I very carefully followed the instructions on the website (provide two copies of lists of your good to follow, including quantity, value, make, model, and serial number). The customs officer was so impressed with our preparedness (“Never in 15 years have I seen someone so well-organized”), that I didn’t know if I should feel proud or embarrassed at my nerdliness. 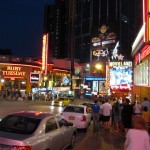 The comparison between the two towns of Niagara Falls (US and Canada) is fascinating. Here, the US town is slowly dying – population has dropped by 50% in the past 50 years, and the town is awash with abandoned buildings and half-hearted attempts at regeneration. Across the border, the Canadian side is heaving – bustling with activity and tacky tourist attractions galore. Ironically, with apologies to my friends from the USA, it felt much more American than Canadian.

Later tonight (at midnight) we catch the overnight train to Chicago, where we’ll be for a couple of days before heading further West.

We went on a trip around the USA as we headed back from England to Canada. Using this account we tracked our progress and published entries throughout our trip. Enjoy!
View all posts by Mike →
This entry was posted in Mike, USA 2011 and tagged USA vs Canada. Bookmark the permalink.