I’m catching up a bit today, after several days where we seem to have moved from one location to the next without much rest in between. Since leaving Chicago we’ve had one night on the train, one night in Flagstaff Arizona, one night at the Grand Canyon, and another night on the train before arriving in Los Angeles and continuing on to San Diego. Our remaining two weeks won’t be quite so stop-start. 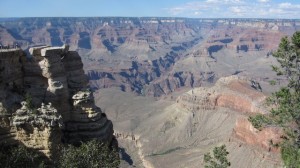 So anyway, we had a great couple of days at the Grand Canyon; a really fantastic complement to all of the city sightseeing we’ve been doing over the past few weeks. For this leg of the journey we rented a car, as it would have been too convoluted and expensive to get to the canyon by train.

It was kind of funny having a car – I realized that I haven’t driven on the right side of the road in over a year (you’ll be pleased to hear that I did not suddenly and unexpectedly veer to the left). It’s been great taking the train and I definitely prefer it over a long driving holiday, but having your own car brings much more flexibility. Suddenly you’re not as concerned about how to get from A to B while also lugging around six bags. We could go to a grocery store (as opposed to a convenience store in the city) where prices are remarkably reasonable. Of course the downside of driving was also there to see; mainly the “are we there yet” type of complaints from the rear seat.

The drive from Flagstaff to the Grand Canyon is about an hour and a half. It’s pretty amazing as you really have no indication at all that you’re about to approach such an amazing area of the country — unlike mountains, where you can see them coming ever nearer as you approach, a canyon just sort of suddenly appears out of nowhere. First there’s desert, and then there’s this massive fissure in the ground.

We spent two days at the canyon and enjoyed the views from each end of the National Park on the south rim. I took several pictures but it felt strangely inadequte; like trying to represent the ocean with a teaspoon of salt water. Suffice it to say that it’s a spectacular place; truly amazing in how it has formed and developed. 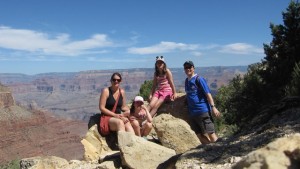 A short meander into the canyon

The girls participated in the Junior Ranger program, which worked out perfectly. Another couple of years and they likely would have scoffed at the idea, but here they took to it with great enthusiasm, filling in a few pages about the canyon and their thoughts, and then participating in one ranger-led activity (we did the adventure hike, where the term ‘hike’ was a gross exaggeration; let’s call it a casual meander — yes, the Adventure Casual Meander). Upon completion of the requisite activities, Connie and Heidi were sworn in as Junior Rangers, and received a faux-metal (plastic) Junior Ranger badge. I was so proud. 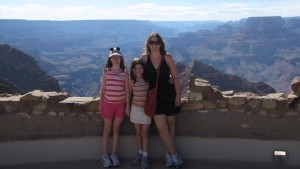 When we left the canyon on our second day we drove around the East Rim road, which takes out of the park on the eastern side. Just before the exit there’s a viewpoint called Desert View, where you look westward down the canyon (as opposed to viewing across the canyon from the south to the north). These were some of the best views, and a fitting way to end our short stay. 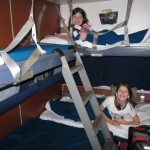 We drove back to Flagstaff, returned the rental car and then waited for our train, which ended up being 3 hours late as it pulled in very close to midnight. Still, this time we had all the reservations in tact, and soon we were in our beds. I’ve had a few requests to show some of the inside of the sleeper room – here’s Connie and Heidi in their beds.

We went on a trip around the USA as we headed back from England to Canada. Using this account we tracked our progress and published entries throughout our trip. Enjoy!
View all posts by Mike →
This entry was posted in USA 2011 and tagged Grand canyon. Bookmark the permalink.