I really like San Francisco. The locals will tell you that it’s the antithesis of Los Angeles: where LA is smoggy, sprawly, and unbearably hot, San Francisco feels cleaner, more compact, and temperate. That, and they have Rice-a-Roni. We also saw something in San Francisco that we haven’t seen on our entire holiday this far: a jacket. It has been substantially colder here than anywhere else we’ve stayed. 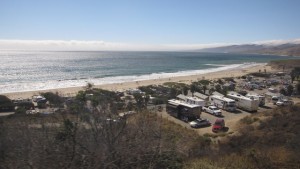 The train trip from San Diego to San Francisco (via Los Angeles) was fantastic; one of the best legs of our trip. For the first half of the journey the train hugs the coastline, often with a completely unobstructed view of the ocean and miles of beach. Being a good German I quickly secured the best seats in the viewing car for this visual feast. 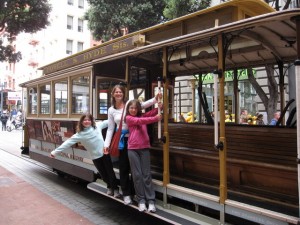 Riding on the cable car

We made it into San Francisco at around midnight, about two hours late. After an overnight near the train station we moved to the HI hostel at Fisherman’s Wharf; less fancy than the Hyatt but well situated near all the sights. Our theme for San Francisco was transportation. We rode on no less than seven forms of transport: taxi, cable car, trolley, bus, subway, commuter train, and shuttle van. The cable car is naturally the most interesting and harrowing; Heidi was upset that we wouldn’t let her ride hanging on to the outside. 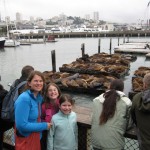 We decided against scaring the children straight and avoided Alcatraz (the infamous prison island within view of the city), but we did enjoy other touristy attractions such as Pier 39, with the sea lions and double-decker carousel. We twice ate at In-N-Out Burger, a California phenomenon where you can order a 100-pattie burger should you wish (I didn’t wish). We also went to the Golden Gate Bridge, where Rachel and Heidi jogged across the span of the bridge while Connie and I casually strolled. 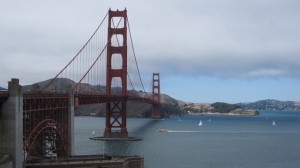 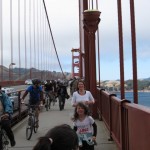 Jogging on the bridge

We’ve been to some nice cities and San Francisco is right up there. It is interesting and it has character. We would have stayed longer and explored more if we could have, but now we’re on our way again to Oregon and Portland. We’re on the home stretch and as I write this on the train we’re passing through pine forests; surely a sign that Canada is not far off now.

We went on a trip around the USA as we headed back from England to Canada. Using this account we tracked our progress and published entries throughout our trip. Enjoy!
View all posts by Mike →
This entry was posted in USA 2011 and tagged hamburgers, san francisco. Bookmark the permalink.