Here we are, the final stop on our trek across the United States. We arrived back in Vancouver yesterday, amidst a small bit of fanfare (balloons were involved) as we disembarked from our last train journey – the 25 minute ride from Vancouver to Coquitlam.

It’s difficult to describe the emotions in just a few sentences; I think I’ll write more about that another time. Suffice it to say that we’re all happy and sad at the same time. Happy that we can finally unpack and not move on again after a few days; happy to see family and friends again; sad that our epic journey is over; sad that we won’t be going back to Bristol again. 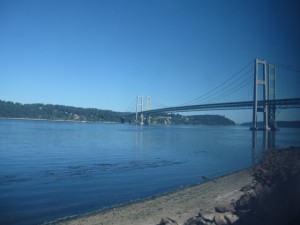 The last leg of our trip started in Portland on Thursday morning. We left early and took the train to Seattle; a very pleasant three hour trip. Seattle is a very cosmopolitan city with a lot going for it, but I found a very noticeable distinction between it and Portland. Where Portland feels clean, friendly, and new, Seattle feels much more edgy and older. It’s probably an unfair comparison, as it’s based on my own limited observations of the areas we were staying in, but nevertheless that’s what it felt like. 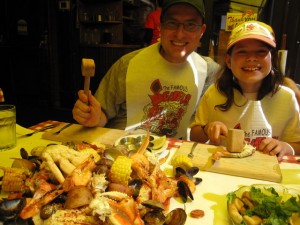 Lunch at the Crab Pot

We stayed in Seattle just for one night, as the Vancouver train leaves early the next morning. We had time to eat at our favourite Seattle restaurant, the Crab Pot, where they provide you with a bucket of seafood, bibs, and mallets. Messy eating is strongly encouraged. In the evening I met up with my friend Brian from Vancouver, who was coming down anyway to see a gig at the fantastically-named Dimitriou’s Jazz Alley. Lee Ritenour and Dave Grushin were featured, along with Dave Weckl and Melvin Davis. If you’re at all into jazz (and who isn’t?), it was excellent entertainment. 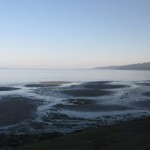 The next morning we left Seattle at 7:45 on the final leg of our Amtrak adventure. The train goes past some fantastic scenery along the pacific coast until we reached Vancouver (where it was delayed by a freight train for 50 minutes before finally pulling into the station). A quick check through customs and we were back in familiar territory.

We had a bit of time to kill so naturally we had sushi for lunch, and then we boarded the Westcoast Express commuter train to head to Coquitlam, where my parents live. Our house isn’t quite ready for us to move in yet, so we’re staying with my parents for a few days. 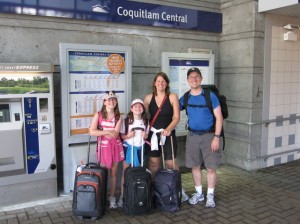 And that’s the end. I appreciate everyone who has taken time to read our blog entries, and thanks to all of you who added comments – it’s great to hear from people along the way. I’ll be continuing to post blog entries every so often as we settle back into life in Canada. In the meantime I can highly recommend the train for a travelling holiday – we had a great experience and would certainly do it again.

We went on a trip around the USA as we headed back from England to Canada. Using this account we tracked our progress and published entries throughout our trip. Enjoy!
View all posts by Mike →
This entry was posted in USA 2011 and tagged Train. Bookmark the permalink.