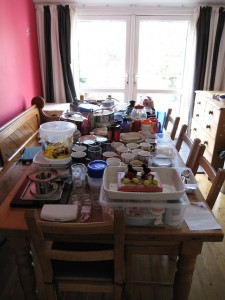 Our kitchen stuff before being packed

After 10 1/2 weeks our shipment containing most of our worldly goods finally arrived yesterday. One wonders how we managed all this time with just the stuff we could more or less carry ourselves…

It’s a useful exercise, going without most of your possessions for a while. And here’s a secret that flies in the face of that pervasive modern religion of capitalism: you don’t need most of what you own.

There’s a show on TV here at the moment that we’ve been watching called Consumed. It’s an expert-help reality type show, where each week features a different family who is clearly swimming in way too much stuff. They usually have more laundry than they can physically fit in their storage spaces, an extra room filled with junk, and things piled all over the floors. We’re not quite talking Hoarders, but certainly these folks are drowning in their own possessions.

The expert of the show engages in an experiment where the family is only allowed to keep the bare essentials, and everything else is removed from the house for 30 days — furniture, clothes, kitchen stuff, everthing. They just get one pot, a table setting each, a suitcase each to keep clothes for the month, and a few “luxury items” to ease the shock factor.

After a month they go to the storage facility where their stuff has been kept, and they try to purge at least half of their belongings (toss, donate, or keep). They often come to realize that they don’t need so many things and that their lives are better when they have fewer possessions.

Imagine that – a Canadian/American Television show that actually espouses the value of having fewer things! It creates a strange dichotomy when the advertisements during the show are trying to convince you to buy things.

Consumerism is pervasive in North American culture; far more than English culture I think. While we were living in Bristol it occurred to me why Costco has failed to make major inroads over there: people just don’t have the space to keep large bulk items. My English friends may wish they had a larger house or more room, but beware: larger houses and more space creates the implied need to fill the space.

But I’ve found it freeing to start to get rid of things. We purged before we left for England, and over the last three weeks we’ve been purging again before our stuff arrived. I hope we continue to reassess and purge some more; I think there’s great value in learning to be content with less. Not to say that I have this completely figured out yet, but I think I’m starting to get it. 10+ weeks without things will have that affect on you.

This entry was posted in England vs Canada and tagged Consumed, possessions. Bookmark the permalink.