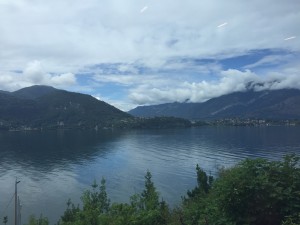 After several days of sightseeing in historic European cities, our trip is now entering a new phase: scenic rail journeys and the mountain vistas of Switzerland.

Our first such journey was from Venice to the small mountain village of Pontresina, near St. Moritz. We left Venice in the morning on a train to Milan — after several days of glorious weather in Venice, it rained as we left the city (curiously, this also happened in Salzburg). 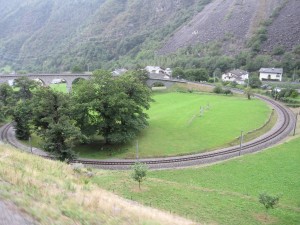 Early in the journey, the train makes a full 360Âº loop as it ascends through the pass. The kind of thing I would have built with my Lego train

Our train went from Venice to Milan, where we changed for another Italian train heading to the tiny town of Tirano (not to be confused with Turino, which I did many times). Although this part of the journey was not an official scenic route, the train wound its way alongside Lake Como with some very nice views.

Tirano is right at the southeastern tip of Switzerland, and the starting point for the Bernina Express. 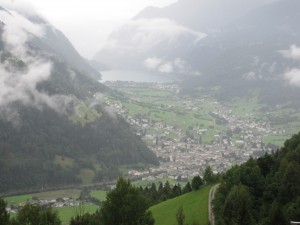 Passing over a small Swiss town in the valley

This route takes you up and over the Bernina pass in eastern Switzerland — it’s unusual in that it has very few tunnels, so you climb along the mountain up to the pass at around 2250m above sea level.

The journey was great, but unfortunately the weather wasn’t fully co-operative. It was raining for the first part of the trip, but then it cleared up a bit once we got to the top of the mountain pass. One thing that was a nice touch on this train was that you could pull down the windows to allow for excellent photo opportunities without the window glare. 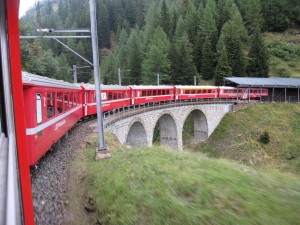 The Bernina express carries on to St. Moritz and Chur, but we got off at Pontresina and stayed at the youth hostel there (literally right across the street from the train station; lovely). We had been on three different trains and were ready for a rest. Rachel also experienced a bit of dizzyness, no doubt from the altitude change, considering that we literally started the day at sea level and ended in the mountains. 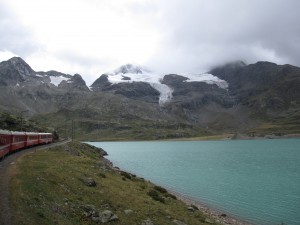 The glacier and silty-blue lake at the top of the Bernina pass. 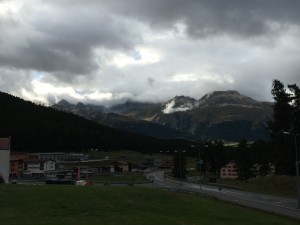 The view of the mountains from Pontresina

This entry was posted in Europe 2015 and tagged glaciers, lakes, mountains, Train. Bookmark the permalink.