Made it to Yankee Stadium to see some afternoon baseball. My original seat was in the direct sunlight on a 32Â° day, so I have downgraded to a higher seat on the shady side. I think lots of other people have done the same. 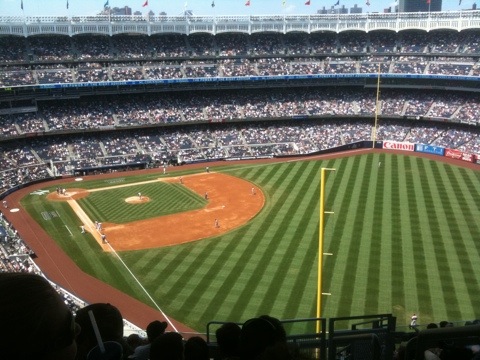 Update: the Yankees won 4-2 in a rather typical Yankees game – one big inning, solid pitching, and Rivera easily closing out the ninth. The stadium is nice and reminiscient of lots of other new ballparks including Safeco in Seattle, but it lacks much character. A note to Liverpool fans – tis better to redevelop the ground than to built a new one.

We went on a trip around the USA as we headed back from England to Canada. Using this account we tracked our progress and published entries throughout our trip. Enjoy!
View all posts by Mike →
This entry was posted in Mike, USA 2011 and tagged Baseball. Bookmark the permalink.